If you thought running into your teacher in the grocery store was weird, what about seeing your physician on the beach?.

These days, the line between our professional lives and our personal lives can sometimes be a bit blurred thanks to social media. We assume that hiring teams look at our online activity when being considered for a job, but beyond that, a lot of us might not think about how our social media profiles are affecting us professionally. Now, some of us might wonder if it even should.

The Article Everyone Is Talking About

An article titled “Prevalence of unprofessional social media content among young vascular surgeons”[1] recently brought this question to the forefront as thousands of medical professionals push back against what society considers unprofessional content.

This past week, #MedBikini trended on Twitter along with many female healthcare professionals posting pictures of themselves in bikinis, arguing that the article (and perhaps the medical field in general) unfairly targets women in its definition of professionalism.

Because of the blowback, the Journal of Vascular Surgery retracted the article from its August 2020 issue. It still begs the question though, is professionalism on social media something healthcare workers should be cautious of? Are studies like this useful, or is professionalism on social media too subjective a criterion that only creates gender biases and unnecessary judgment?

Tell Me About It

First, let’s understand the article and the authors’ intent. A survey study done in 2012 found that over 40% of adults said that the information they found while searching for their potential doctor on social media affected their choice of physician. The number of adults that consult the internet in choosing a doctor is even higher.

Knowing this, it’s in a healthcare worker’s interest to maintain a certain level of professionalism on their social media accounts that are open to the general public. (It seems to me that an easy solution would be to make your accounts private, but that’s not the point.)

Using a database, the authors created a list of young vascular surgeon trainees from 2016 to 2018 and created accounts on platforms where these surgeons had publicly accessible content. They identified 480 vascular surgeons, and 235 of them had public accounts across all social media platforms used (Facebook, Instagram, and Twitter).

They then screened the content for being what they considered to be either clearly unprofessional or potentially unprofessional, which is where the problem of subjectivity and bias comes in.

What Is Considered Unprofessional? 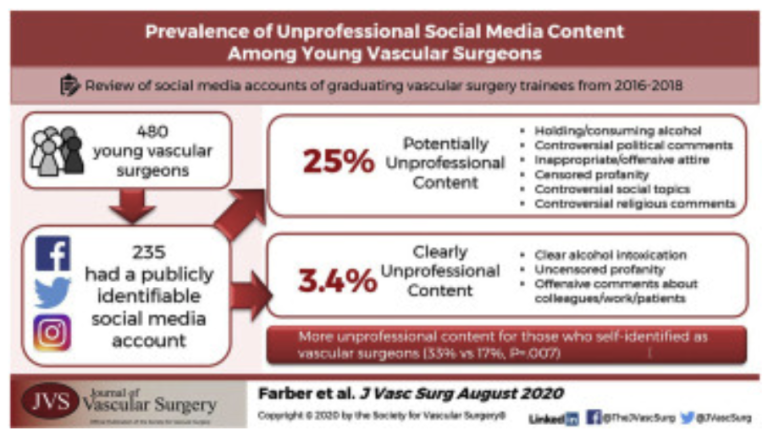 The Problem of Subjectivity in Determining “Professionalism”

The fact that this study used highly subjective methods is clear. Each potential patient will have unique guidelines for what would stop them from seeing a particular doctor or surgeon, and individuals can have completely different standards for what is professional.

I, for one, have no problem with the researchers’ criteria for “clearly unprofessional.” HIPPA violations aren’t acceptable. And honestly, if I saw or read that the person who was going to cut me open was getting plastered every night or being routinely reckless with drugs, I would have second thoughts.

However, the potentially unprofessional content is what was troublesome for these researchers and what led to the pressure to retract the article. A picture of a surgeon holding a beer or wearing a bathing suit shouldn’t be detrimental to their professional reputation in most circles.

One could argue that whether you like it or not, some people will be offended by “potentially unprofessional content.” Healthcare professionals, like anyone, take the risk of alienating clientele and coworkers when posting about controversial political topics, profanity, or pictures of drug use.

There has been a loud outcry against articles like this one, arguing that they target members of marginalized populations in the medical community by labeling political opinions or posts about social topics as unprofessional. This criticism, while well-intentioned, ignores the fact that the study counted ANY political opinion as potentially unprofessional. In other words, the study doesn't take sides but assumes that on either side of the aisle, some potential clients will be offended by a controversial post.

Ideally, social media would be a space where medical professionals could draw attention to topics or problems they care about, especially if they have to do with public health (face masks, abortion, "fat acceptance," etc.). The unfortunate reality is that creating a post about a controversial topic will drive some people away. What matters is whether or not you're okay with that.

No matter your opinion of the article, offending people or rubbing them the wrong way is not going to go away, so it’s something to at least be aware of. It’s up to the individual themselves to decide to take that risk or not (or just adjust your privacy settings, people!).

Many feel this definition of professionalism (a definition people claim exists in the medical field in general) disproportionately targets women, hence the #MedBikini trend on Twitter. The “inappropriate attire” category of potentially unprofessional content in this study most likely refers a lot more to bikinis than to swim trunks. (Speedos, anyone?)

Now I know some of you may be thinking “wow she owns a swimsuit, how unprofessional”, but all I’m thinking is “wow look at my sternocleidomastoids”.#MedBikini pic.twitter.com/xOwXTV7p9Q

The #MedBikini trend is a good one for trying to adjust the general population’s standards of professionalism, particularly for female professionals who are held to a different standard of modesty.

Was the article misogynistic? I wouldn't go that far. Biased and subjective? Definitely.

What Do We Do with This?

What we should take from this situation is the opportunity to realize that we’re all human (yes, even doctors). Humans have normal lives after work and like to have fun. On the other hand, humans will judge the people they trust with their health based on what is published on social media.

For now, let’s just agree that how we present ourselves online matters but that a bikini picture on social media is okay, too.

Subscribe to our YouTube channel or check out our Resource Library full of great podcasts, videos, and digital downloads!